A Tale of Two Laundries

Here’s another 500 word flash fiction story for you! It is currently competing in the 2017 Iron Writer Spring Equinox Tournament against 20 other stories. The top 5 of us will advance to the final round. Wish me luck! 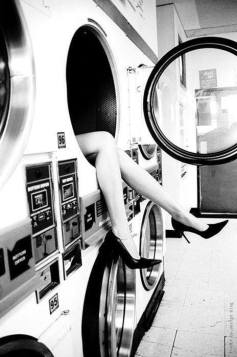 Elements: A woman in a clothes dryer, Menstrual cramps, A hairbrush without bristles, A wooden hanger

A Tale of Two Laundries

The life of a mad scientist is often glamorized. But believe me, it’s not all bringing patchwork corpses to life, or building the ultimate death ray. Especially for those of us on a budget, there are simply days when you’ve got to do mundane things. Like my laundry. Which is how I found myself alone at the Laundromat one Saturday night.

Mad science pays a lot less than you’d think it would.

There are laundries closer to my apartment, but I like Ike’s Laundry and Tan’s 1950s atmosphere. Wooden clothes hangers, copper embossed ceiling tiles, and all chrome décor. Cell reception was terrible, since it formed a Faraday cage of sorts, but that suited me fine.

That is, until she happened.

As I watched my laundry tumble in the massive quarter-driven dryer, I had a thought: what better way to clean clothes than to swap them with their as-yet-unused counterparts in alternate dimensions? It’d work through entanglement, and could remove any stain by way of literally never having happened. Of course, some alternate me would have unexplained stains appearing on his clothes. But that’s not my problem. Heck, the same principal could restore the bristles on an old favorite hairbrush, or instantly fix a flat tire…

A flash of light and a booming noise startled me from my daydreaming. It came from my dryer. A jump-suited woman peered out of the machine at me, grinning. She slapped at the glass door with the palm of her hand, and I helped her out.

She stood a little shorter than me, with auburn hair like mine, only longer. Her eyes could have been mine, except for the merry twinkle in them.

“I did it!” she cried, hugging me. Toasty warm, she smelled of my dryer sheets.

A frown clouded her freckled face. “And why shouldn’t I?”

She nodded. Her smile restored, “Looks like I’m a man in this universe?”

I shrugged. “What’s that got to do with it? You’re just like the others. All evil. Like that me from Atlantis, who stole my marine biologist girlfriend! Or the other me who fried my equipment with an EMP burst to stop my death ray experiments. Or—”

She grinned. “See? It’s meant to be, we’re dimension hoppers! All of us discover quantum tunneling!”

“And you stole my idea. And my laundry! It’s criminal!”

Time for my secret weapon.

In a fury, I pulled out an electronic patch made of pink flexible metal, its surface etched with a crossed-out Venus symbol. I slapped it onto her bare forearm. “Ha! I stole that from the last me – feel the Femmeliminator! Ah ha ha!”

She closed her eyes and her face went slack, followed by a blissful smile. “Dude, we’re about to become filthy stinking rich! That doodad just cured my cramps!”

Sales of Femmeliminators have funded our joint mad science ventures quite nicely.

Secret: This is a sort of sequel to my much earlier story, “Moby Me”.